The Merrie Islington - sunk by a U-boat off Whitby

Many of the articles involved on this site involve a personal journey. They link to someones family history which has been meticulously researched. This is one such article. I was contacted by a Hull teacher researching her own family ties to the fishing industry. Her Grandfather had served on a Hull registered steam trawler which had fished out of Scarborough - The Merrie Islington (H83).

It was a trawler which, like many others, was sunk during World War One by the German U-boats. A newspaper clipping shows the crew - with one man listed as 'unknown'. This is where out story begins because that man was this Hull teachers Grandfather - Albert Vine.

The Merrie Islington was sunk on the 6th May 1915. It lies 5-6 miles North East of the Whitby Buoy.

The skipper, James Walker, reported how he had left Scarborough harbour early on wednesday morning and had had a good nights fishing. They were preparing to resume operations at 8am when suddenly a submarine appeared. The gun was manned and other sailors were outside by the conning tower. As usual with trawler attacks the men crew were ordered off the vessel as quickly as possible. The crew obeyed the order - the very word submarine put the fear of god into fishermen.

The crew obeyed this order and were soon clear heading towards a minesweeper two miles away. The submarine appeared to follow the minesweeper for some time seemingly watching its course. The U-boat returned to sink the Merrie Islington. A bomb was placed on board - typical as the submarine did not like to waste valuable torpedoes on a mere steam trawler. The Merrie sank at 10 o'clock.

The minesweeper transferred the crew of the merrie Islington into a fishing coble. The fishing coble landed at Whitby at around 11 o'clock. They arrrived in Scarborough later that afternoon.

The skipper felt that the submarine had delayed sinking the trawler because it had its eye on a coasting steamer which could not be caught. It sank the Merrie Islington one and a half hours after its crew left.

Of the crew that survived (which was all of them) Jim Walker died on board the Steam Trawler Jack Johnson which was destroyed by a mine left over from World War One in September 1920. Tip Heritage, who appeared in the crew photo, died shortly after on board the Condor. His body was found on Speeton Sands 30 hours after the explosion. He appears to have swam ashore and died of exposure and exhaustion. 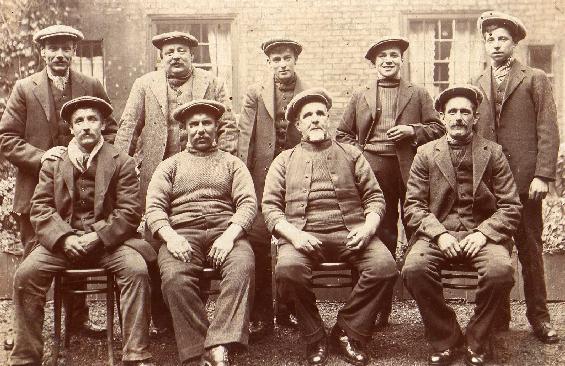 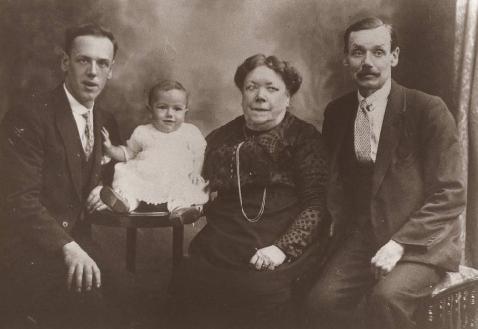 Photo: The family of Albert Vine from Hull.
Albert Vine was aproximately 42 when the trawler was sunk. He is listed in the 1901 census as being a 'fireman' on the SS Adelaide, which would make sense if he then became Chief Engineer on the Merrie. He lived in Hull at the time. It was not unusual for fishermen to fish from ports other than what might be considered as home.

The story does not end there. In the modern era the wreck of the Merrie Islington has been dived and researched by the members of Andy Jacksons team. They have recovered the bell and it is now on show at the Leeds Arms on Church Road, Scarborough.

The Scarborough Maritime Heritage centre does tend to dwell somewhat on the major fishing families in Scarborough. The Normandales, the Rowleys, the Cammishes, the Pashbys, and the Sheader to name but a few. In this case this article was inspired by the man on the photo who is listed as 'unknown' - certainly not one of the important Scarborough fishing families. He was a man who came from a different port. There must have been many Albert Vines in World War One. Perhaps the very nature of fishing history is slightly different in Hull and Grimsby. The smaller ports tend to revolve around families. Scarborough has prominent fishing families such as the Pashbys, the Normandales. Filey has the Cammish and Jenkinson families. Robin Hood's Bay has the Harrison and in particular the Storm family. The fishing histories revolve around family events - especially tragedies. In Hull and Grimsby there were hundreds of trawlers. No one family dominated the scene. Many trawler losses were barely reported in the local papers. The names of families were lost in an industry which was bigger and more anonymous. Yet the historical interest is the same in both places.