Sailor's Graves on the Scarborough Coastline

There is something quite moving about a sailors grave. Many of course die at sea often at places which are aptly named such as Killerby Cliffs or Sailors Grave (Jacksons Bay). But the sea often gives up those it has taken and so they can be buried on land. Normally seamen will be buried somewhere close at hand. They are like soldiers who are buried where they fall.

Scarboroughs St Mary's Church contains the grave of a sailor lost at sea. It is the last resting place of William Sibborn Blythe who died in a storm 8th March,1844, aged 44 years. He had been onboard the brig Betty's Delight. The inscription features a moving poem :-

"He's safely moored amongst the peaceful dead,
and from his labours rests his weary head,
With neptunes waves many times he's fought,
Yet the blow was struck when least was thought."

The Grave is in the section facing St Marys Walk (about twenty metres along). By coincidence it is next to the grave of William Mollons wife, Elizabeth. He was a famous Scarborough Lifeboatman who survived the 1836 tragedy when ten were lost. He lived for many years.

In the section of the graveyard going down the hill is the grave of Anthony Pearson (about 10 metres from the first house on St Marys Walk). He was a master mariner who was

"shipwrecked and took to his boat and died therein".

He was buried at Fladstrand in Jutland on 3rd December 1803. This stone was erected to his memory.

Many sailors died in strange lands. It is touching to know that they were always given the same treatment as locals. In the storms of October 28-29th,1880 a naked man was washed up into Hayburn Wyke. He was flung with such force into the cliff that he was stuck head first. It took a good deal of effort from local labourer, Ed Leadley and a Scalby PC Weedy to free him. They were in great danger as they had to enter the water to free him.

The Burniston body was thought to be from a Swedish brig which was driven ashore on rocks at Staintondale. One man survived the wreck. He had to climb up the cliffs and woke up farmers in Staintondale. He could not speak english but somehow got help to pull up another survivor from the shore. Three others crew from the Swedish brig were drowned.

The burial of those drowned in Hayburn Wyke was quite touching considering that those buried were complete strangers from another land. The Vicar of Cloughtons wife, Mrs Carris,

"attached to each coffin a beautiful floral cross. There were also some very pretty wreathes and bunches of flowers placed on the coffins by some of the sympathetic villagers."

People could show respect in subtle ways. Great detail was paid to identifying the bodies of unknown sailors. One of the sailors who drowned at Hayburn Wyke was described as newly shaved, healthy and stout with a tattoo on his left arm of a square rigged ship and two figures. His right arm featured a ship, drawn as if in the distance and a man and a woman. This man was Swedish and so there was really no hope of finding out his identity. Yet, he was described in meticulous detail. When you cannot give someone a name then at least you can describe his tattoos.

The huge storms that smashed the Swedish Brig into Staintondale cliffs also claimed many other lives. This sparked an article written in the Scarborough Mercury, November 6th, 1880. It records some of the graves found in Filey's Churchyard. On the left hand side as you enter is the grave of William Agar, master mariner (aged 28) and his wife Elizabeth (27) who died whilst on passage from London to Shields on January 27th. The article also records the grave of John Cammish who was drowned in Filey Bay on 22nd December, 1824. His body was not found until 5th February, 1825 at Flamborough. He was 68 years old. Other members of the Cammish family are also buried here - William Cammish who drowned at sea March 1851.

"While wandering over this churchyard, the eye is attracted by a small cross, in a secluded spot, graced by weeping willows, which points out where "strange sailors are interred"".

This spot was erected to commemorate the loss of the Italian Barque, Unico and the 12 crew members who died in it (16th January 1871).

"Words are inadaquate to tell the thoughts which cross the mind at the momment while reading this monument to the memory of those who perished so far from their native land".

The names of some of the crew were listed - Angelo Dodero (Captain), Gaetono Paganetti (mate), Caro Lavaggi (seaman) and Frances Burgino (apprentice). But 5 others were not named. Such was the fate of so many sailors - to die in a foreign land with funeral services attended only by strangers.

In the Dean Road and Manor Road cemetry there are a few notable graves. Take for instance the grave of Thomas Eves, lost at sea on the John Wesley October 28th, 1869. His grave features the following verse:

"Waters flowed on every side,
No friend was near to save
I was compelled to bow and die
I found a watery grave"

Many lost their lives in World War One, both on fishing boats put down by the U-Boats and from minesweepers lost. One such man was Robert Heritage who was lost on the steam trawler Condor on 29th May, 1915. He was a very popular man and many attended his funeral. It is thought that he swam thirty miles and was washed up on Speeton Rocks. After such a epic effort to save his own life he died of exposure and exhaustion on the rocks. His grave features the following verse

"Gone straight home from the shattered wreck,
And no messenger tells of the wreck
Eve tide is o'er, life cares are past,
Safely anchored in port at last"

Then there is the grave of John Nicholas Sheader who died on the life boat on 8th December 1954. His gravestone features the following verse

"Greater love hath no man than this, that a man lay down his life for his friends".

Two others died on the lifeboat that day. Many men have died in the sea having left port on a fine day with calm seas. Those who venture out in mountainous seas deserve special praise. Those who lose their lives on a lifeboat are long remembered.

In the modern age people have begun to trace their ancestry back to the time of the great sailing ships. They glimpse the lives of people long forgotten. Often all that is left is the gravestone with a fading inscription. Take the case of Rosemary Barrett - from Australian - who visited the graves of her Great Great Grandparents at barton Upon Humber.

All deaths at sea seem so tragic. Take the case of George and Henry Field. They perished on board the Scarborough Yawl Eliza near Filey during the gales, October 28th and 29th, 1880 aged 34 and 27 years. They were buried in Barton Upon Humber. Their parents James and Sarah Field lived a long life. James was a sailor and coastguard. He moved from Great Yarmouth to Ramsgate, then Immingham and finally onto Barton Upon Humber. Eventually they died and along with them the memory of their sons so cruelly lost. Just recently Rosemary Barrett visited this country from Australia. She traced her ancestry. Her Great Grandfather John Field was an elder brother of the two boys. Rosemary was able to visit a time and place far back in history. Virtually all that is left is a gravestone with a now fading inscription. 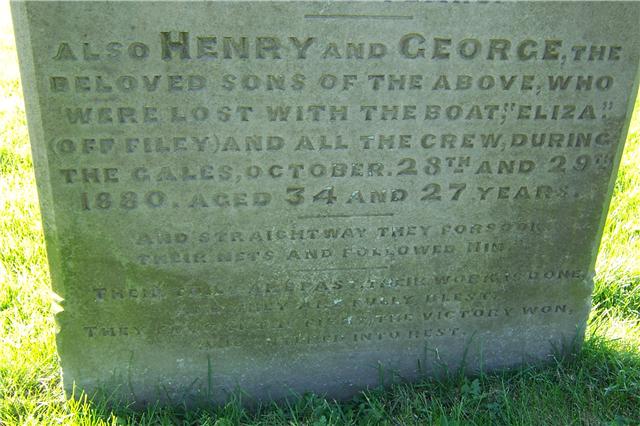 Picture above : The gravestone of George and Henry Field - lost on board the Scarborough Yawl "Eliza" during the gales of 28th and 29th October 1880. It was just one of the boats that littered the Yorkshire coast.