Tip Heritages epic swim only to die of exposure at Speeton

In June, 1915 the Condor blew up. It was sunk by a U-Boat off Cloughton. All the crew were lost. These were the bare facts. Yet what is easily forgotten is an epic attempt by the skipper Tip Heritage to save his own life.

He swam all the way from Cloughton and was washed ashore at Speeton Cliffs near Filey. Many old fishermen will tell you its pointless learning to swim - if anything happens then the fishermans heavy boots would drag him down. Many boats would be lost far out at sea and nothing could be done in time. Swimming would only prolong the agony.

Tip Heritage's body was found on Speeton Sands by a local farmer named Sellers. He was carried from the beach to the farmers cottage with the help of some other local men working in the vicinity. The blinds were drawn at half mast in sympathy with the bereaved.

Picture above :Robert "Tip" Heritage who made swam 25 miles from Cloughton only to die on Speeton Sands of exposure and exhaustion.

Tip Heritage was described as the best swimmer in the Port of Scarborough. His body was found "still dressed in fishing attire with the exception of his boots and cap". Its possible he survived all the way to Filey swimming. According to a witness his hands and fingernails were blackened as if he had been holding onto something very tightly(holding onto a piece of wreckage). Perhaps he made this epic journey only to die of exhaustion and exposure on the beach.

The Condor had made its way to the fishing grounds and was fishing along with several other local trawlers. A loud explosion was heard and it became apparent that the vessel had been blown up. A small boat was found nearby with Condors name upon it. 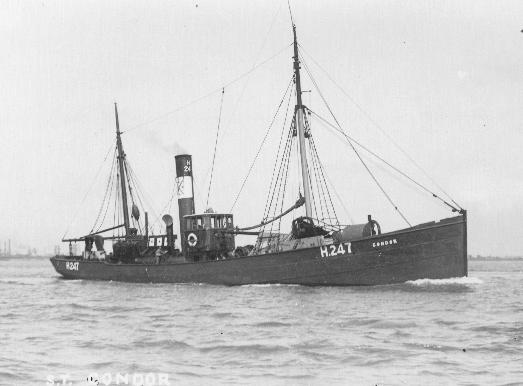 An Inquest into Robert Heritages death was held at Woodbine House, Speeton. The coroner was Sir Luke White MP, East Riding Coroner. It was found that "The finding of the skipper points to the conclusion that the rcew have perished at the hands of the enemy".

The body was identified by Richard Crawford, who knew him well. He had last seen him when he was about to go to sea along with several other trawlers.

The Condor was the property of the Ramsdale Steam Trawling Company of 7 West Pier, Scarborough.