On 25th September, 1916 practically all of the Scarborough Trawling fleet was wiped out in a single night by a U-Boat attack. Eleven trawlers were sunk from Scarborough amongst others. The crews escaped with their lives. The Mercury reported, "The crews were landed at other ports, Shields and Hartlepool, and until their safety was notified there was great anxiety". It was a major blow to Scarborough's fishing industry as these boats could not be replaced.

One trawler got away. All the Scarborough trawlers were in close formation using oil lamps to signal that they had their nets down. The Ben Hope was a little further away. Her skipper, Walter "Wanny" Crawford heard gunfire and ordered his crew to haul the nets in and then sailed away at great speed.

The U-Boat commander later stopped a Norwegian Steamer "Tromp" and asked her to take the captured fishermen on board. They were taken to Scarborough had already lost several trawlers in the war - the Condor, Florence, Dalhousie and the Merrie Islington. Scarborough only had four trawlers left : Penguin(SH 223) , Ben Hope(SH 24), Scorpion(SH 182) and Electric(This trawler was fishing out of other ports). There was also a drifter The Gamester(SH 204).

News spread fast and a moving letter was sent from those serving overseas to Mr Harrison at 4 West Pier Offices. It was from H Sellers, A Miller, G Hardy, H Ruderforth, T Cammish, S Cammish, A Warren and T Eland. It read "It was with the deepest regret that they heard of the loss of the trawlers. It seemed at first unbelievable that in a few hours practically the whole of the fishing fleet which had taken years to build was wiped out in so ruthless a manner".

Scarborough was later closed as a fishing port by the Admiralty. In 1917 the remaining Scarborough trawlers sailed in northern waters off Aberdeen. They were often protected in convoys. U-Boats were less likely to venture up here.

Grimsby as well suffered badly at the same time from U-boat attacks. Eleven trawlers were sunk on one night. They were The Andromeda, Mercury, Resino, Restless, Vivella, Rego, Devonshire, Beachwood, Britannia, Welsby and John Grant. The trawlers were stripped of everything useful and sank. Some trawlers escaped. One Hull trawler cut her gear and escaped under fire. The boats containing the crews were picked up by the Ostero and towed into Grimsby.

The fishermen were generally allowed to get off their boats before they were sunk. The Mate of the Welsby described how "a submarine came alongside the welsby, and ordered the crew to clear off, the commander was evidently in a hurry, for he gave the men no time to take their belongings, they therefore lost all of their possessions".

Some of the German behaviour provided headlines to the newspapers. One skipper was told "Why do you run away? When you see a German Submarine you always want to stop". The crew of the Vivella were taken onboard the submarine and told to keep smiling. They then had their photos taken. Some of the engineers were taken on board the U-Boats and interviewed.

The Norwegians did not escape the U-Boat campaign either. Many Norwegian Merchant ships were sunk. This was particularly annoying for the Norwegians ,The newspaper 'Tidenstags' wrote "the German Merchant Fleet, in increasing numbers, relying on England respecting the Territorial Waters Convention, is creeping up the coast and cynically enjoying the hospitality of Norwegian harbours, carrying wares to Norway, and getting in exchange goods that are vital and essential to her existence". So the Germans were creating a monopoly for themselves by sinking Norwegian ships then having the audacity to go and sell them goods. 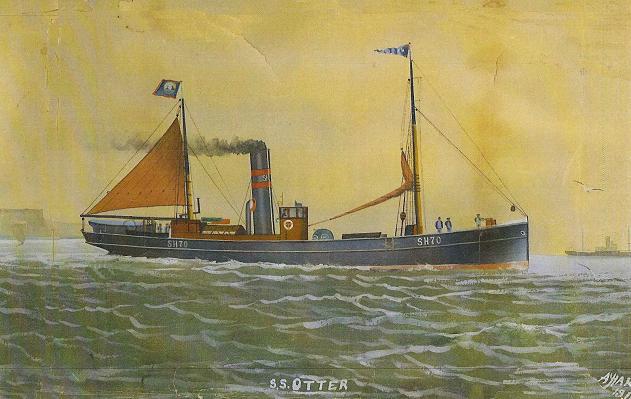 Picture above : This is a painting of the Otter. It was passed on to this website by Allan Eastwood who lives in far away Texas, USA. His grandfather Charles Martin worked on this trawler. He lived on Longwestgate where many of the fisher people lived. His grandparents moved to Aberdeen even though they had been both born and raised in Scarborough and had large families there. Allan speculates that they may have moved to Aberdeen after the sinking of the Otter.

Eleven Scarborough trawlers were sunk whilst their crews all survived. With so many trawlers sunk there was not enough work for the fishermen. The port of Scarborough was later closed to fishing by the Admiralty. The trawlers all moved to the north of Scotland where they had greater protection from the fleet. Not only did Allans grandfather and his wife Margaret move to Aberdeen but they also took her much younger sisters Annie and Lizzie Spavin with them.

This was because they were supporting them financially as their mother had been long widowed. As a sidenote an even younger brother Jack Spavin regularly played centre forward for Nottingham Forest in the old First Division in the early 1920's.

Other articles that you may find interesting