The Schermuly Line Thrower was invented by William Schermuly and his son, Capt. Conrad D. Schermuly DCM. William Schermuly was born in 1857. He went to sea on HMS Warspite and other ships. After leaving a maritime life in 1880 he set about saving the lives of his fellow seamen, saying, ‘Lost ships can be replaced but lives are gone forever.’ Many men were lost within sight of the coast because a line could not be secured to the wreck. Schermuly invented a simple and easy to use rocket system that included a coiled line that payed out smoothly. In WWI the Canadian Army used them for projecting telegraph cables from trench to trench whilst under fire. They could also fire a grappling hook to enable barbed wire entanglements to be pulled away.

When a ship was wrecked along the coast, the rocket and line could be fired from the ship or the shore. The thin cord would then be used to pull over a thicker rope attached to which would be a ‘breeches buoy’ to carry people off the vessel to the shore. An early line-thrower was installed aboard Earnest Shackleton’s ship Endurance.  Both Shackleton and Capt. Scott were amongst the first to recognise the value of the apparatus. By January 1st 1929 an Act of Parliament made the carrying of such equipment compulsory in British Registered ships of over 500 tons and by 1938 a new Act made it compulsory for all ships over 80 tons or 50 feet in length. The apparatus was developed and improved over the years and this particular set was placed aboard the M V Coronia just prior to the commencement of her war service. It was removed in 1968, before her sale to Messrs Bolson’s of Poole in Dorset.  The Coronia was a Scarborough registered passenger vessel and sailed from her homeport from her launch in June 1935 until her departure in 1968, apart from her war service 1939 to 1945. J Martin Johnson presented the set to the Scarborough Maritime Heritage Centre. Martin, together with his father Jack Johnson, were owners of the Coronia, Scarborough’s largest and fastest passenger vessel in its day.

A specialist engineer has now disarmed the rockets and firing cartridges within the set, for health and safety reasons.

1.      A sturdy steel carrying case with authenticating ‘Schermuly’  decal (logo) on the lid and with carrying handles at each side. A hinged lid and two firm brass clips to secure it.

3.      4 rockets complete with metal bridals and short lengths of steel wire to stop the ordinary line from catching fire at the back of the rocket.

4.      One box of firing cartridges that are each loaded into the gun. 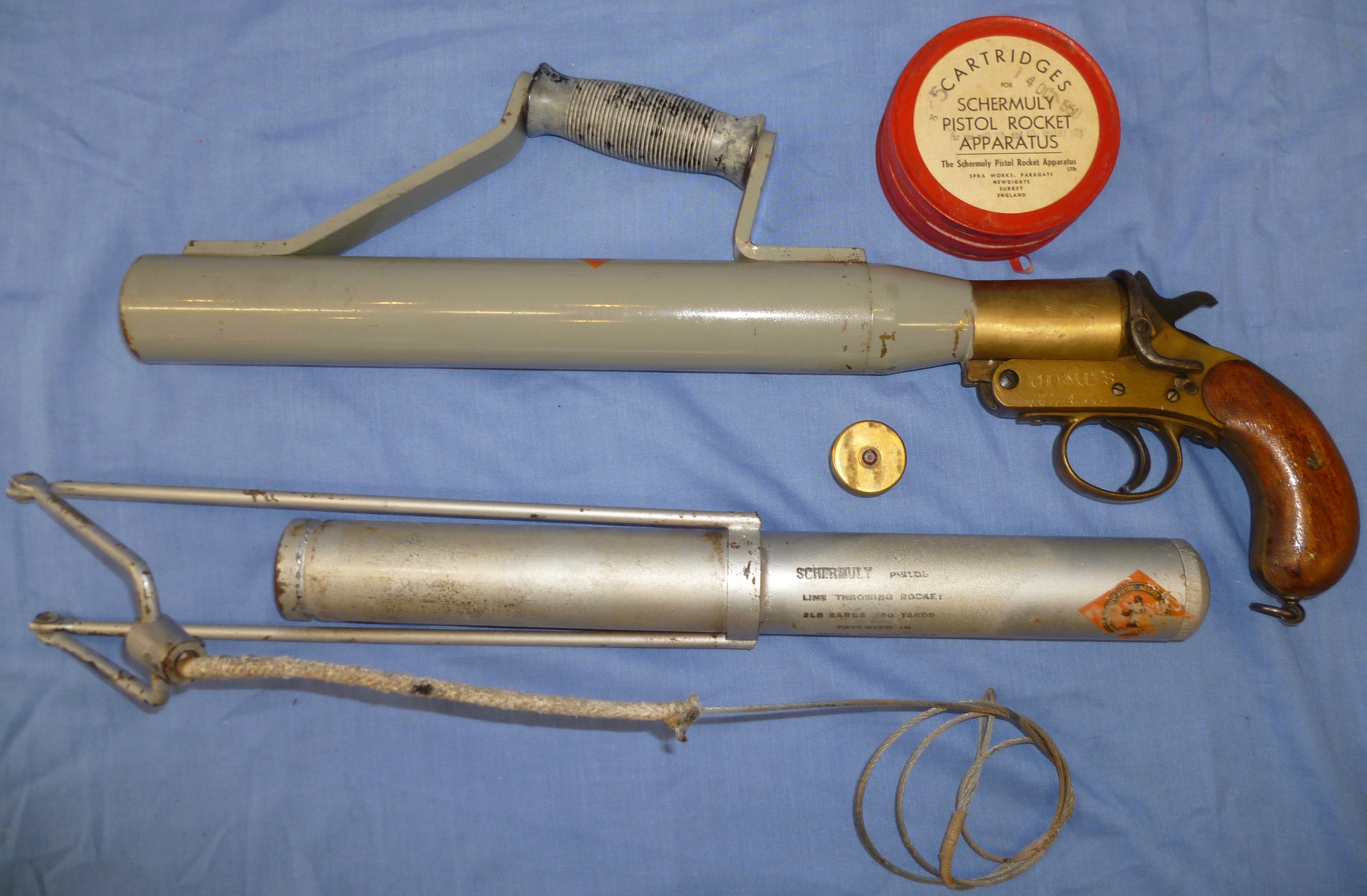