John was born in Luton on 21 June 1929 to Robin Rushton, then clerk, later accountant and champion chess player, and Annie Howlett, then forewoman. John Rushton joined the navy age 16 just before the Second World War ended. The Germans surrendered shortly afterwards but John believed this was a coincidence. Following a scholarship for Luton Grammer School, John’s entrance to the navy was part of a programme for trainee engineers. Out of 3,000 applicants to sit the entrance exam, John came 33rd. The navy offered 33 scholarships.

Quickly realising the navy was not the career for him John, with the assistance of his father, spent some time persuading his way out. With the qualifications and experience he had he was able to gain work as health and safety overseers in factories in Luton for several years. He was keen to expand his horizons and applied to the necessary board in London for unemployment benefit to allow him time to take his ‘A’ levels for entrance to University. The officer granted him 6 weeks benefits, for which he felt privileged. He studied and gained those necessary ‘A’ levels during that time and continued his studies at University College and London School of Economics. On arrival in London he boarded for a short time in a homeless men’s hostel, where despite tying his shoes by their laces to the bed head had them stolen. To see him through his University years his part time work included: barrel organ singing, time and motion study, carrying a sandwich board dressed as Davy Crocket, waiter at a hotel and dresser at the Old Vic, waiting on amongst others, so his story goes, Laurence Olivier. As he often said jobs were abundant then, especially for those studying for academic qualifications. He met his wife of 47 years Eileen at the BBC, where she worked as a cleaner, whilst studying Fine Art at the Slade. They were married in Newbiggen in 1954.

A daughter Geraldine was born in 1959, they continued to live in London and he graduated from LSE with a degree in sociology. Following which he was successful in his application for tutor organiser for the Workers Educational Association for the Ryedale area. Moving to Pickering the couple took up residence in a flat in Beck Isle (later to become the Beck Isle Museum) where they had their second daughter Erika in 1960. In addition to his organising duties he also took adult education classes himself, developing an early interest in history. John took to lecturing in local history like a duck to water and went on to develop annual local history exhibitions at Pickering, leading to the formation in partnership with Gordon Clitheroe of a museum of local history at Beck Isle. The building was bought with the generous gift of an unnamed local benefactor.

Moving to teachers social housing with his wife and two daughters as Beck Isles transition from flats to museum began, he fathered a further two children Tom, 1964 and Emma 1965. After some years as a local councillor John set up a yearly Pickering carnival along with Don Chapman. For many years he was well known for his appearance in flamboyant home-crafted outfits. In later years he wrote the yearly Middleton pantomime, helped organise a Beacon and street party for the Queen’s jubilee and historical Pickering pageants.

For many years John wrote a newspaper column on local history and daily events in the Gazette and Herald. Information was gathered from nightly visits to local pubs and clubs where a keen favourite pastime was to talk and collect stories.

Following his redundancy through educational cuts in 1992 from his post as tutor organiser John continued to lecture for the WEA and Hull University. He moved to Scarborough age 71 to start a new life with partner Sheila McGeown and experience a different town. Here he was president of Scarborough Archaeological and Historical Society for several years and was a founding member and archivist of the new Scarborough Maritime Heritage Centre. In 2005 he was awarded the MBE for ‘services to the community’. He returned to his drinking and socialising of early years finding a welcome home and some singing companions in The Valley Bar.

Having kept prostrate cancer at bay for over ten years he died shortly before his 84th birthday after his cancer finally spread. He leaves behind three daughters, eight grandchildren and a first great grandchild born in Australia the week before he died.

John Rushton’s books include: The History of Ryedale: From Earliest times to the year 2003; Early Tudor Yorkshire; Yorkshire in the Reign of Elizabeth 1; The Story of Pickering; Dalby: Valley of Change; The Ryedale Story. John Rushton’s unique collection of historical books and writings was donated by him before he died to Ryedale Folk Museum where it forms part of a recently opened community library research room and archive centre. He stated, “It is every scholars dream that his work is later useful to others”.

Mark Vesey, chairman of the Scarborough Maritime Heritage Centre said "It is with great sadness that our volunteers heard the news of John passing away. He was a founding member of the Maritime Centre, encouraging the volunteers to aim high and incorporate as much local history as possible. John was an inspiration to so many people, always friendly and willing to share his love of history with anyone. He came from a generation that held doors open for people and not just in the physical sense. He was always interested in meeting new people, finding out what made them tick and getting them involved in the community. His enthusiasm was infectious and he was always keen to get people celebrating the past in a fun way. One of our volunteers commented after reading John’s book on Elizabethan Yorkshire ‘One can almost feel the mud and smell the people and walk in those narrow lanes. A little bare bones history comes alive'. Even in the last few months of his life he was busy transcribing historical texts, sorting and sharing his lifelong collection of files and information. The Maritime Centre owes an awful lot to John and we have a memorial plaque in our library & archive room named after him. John was one of life’s great characters and we will all miss him dearly". 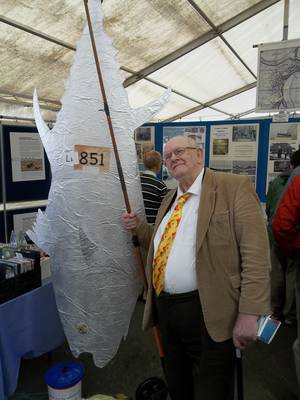