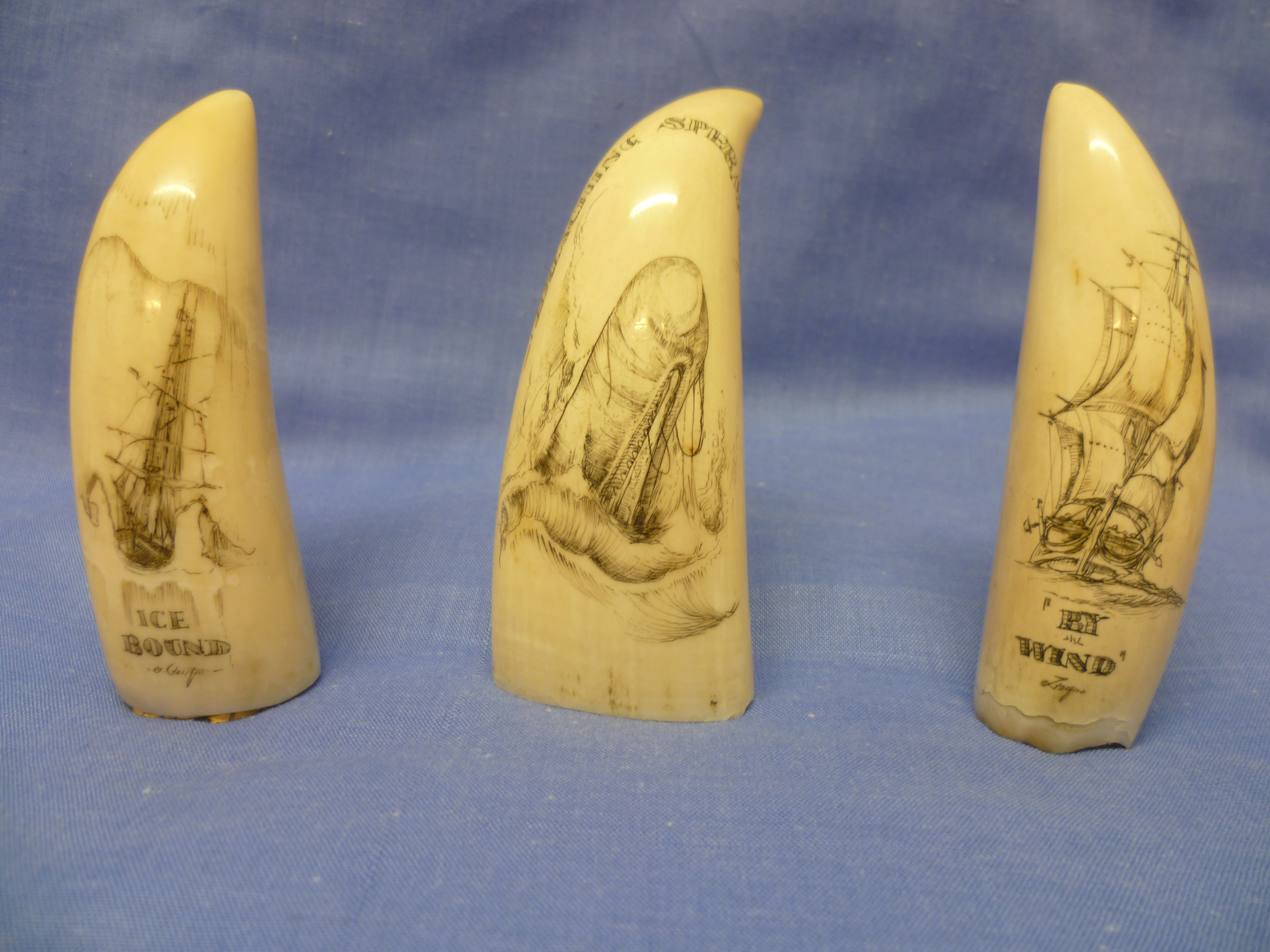 The Scarborough Maritime Heritage centre has some examples of Scrimshaw on display which were donated by Andrea Smith.

Scrimshaw is the name given to scrollwork, engravings, and carvings done in bone or ivory. Typically it refers to the handiwork created by whalers made from the byproducts from harvesting them from marine mammals. It is most commonly made out of the bones and teeth of sperm whales, the baleen of other whales, and the tusks of walruses. It takes the form of elaborate engravings in the form of pictures and lettering on the surface of the bone or tooth, with the engraving highlighted using a pigment, or, less often, small sculptures made from the same material. The making of scrimshaw began on whaling ships between 1745 and 1759 on the Pacific Ocean, and survived until the ban on commercial whaling in 1986.

Where the word “Scrimshaw” actually came from, no one really knows but the general consensus is that it was probably derived from a Dutch or English nautical slang expression meaning “to waste time.”  In other words, anything a seaman made in his off duty hours, when there was nothing else of importance to do on the ship was called “Scrimshaw” maybe because the ship’s Captain thought it was foolishness to sit and scratch pictures into a whale’s tooth and to do so was a waste of time.  Many whaling voyages could last 3, 4, 5 years or more and several weeks or even months would pass between Whale sightings. Without something to occupy their time the seamen may well have gone stir crazy in the cramped quarters and poor living conditions aboard these ships.

Although it is generally accepted that the modern form of Scrimshaw is an original American art form that dates back over 200 years, there are accounts of Native American Eskimos/Inuit’s practicing a precursor to the style of Scrimshaw the whalers/sailors were doing as early as 100 to 200 AD.  In fact there are accounts of Eskimo artefacts being excavated from traditional hunting camp sites dating back as many as 6,000 years ago.

Eskimos used Whale and Walrus ivory and bone for many of their tools and utensils, such as, harpoon fore shafts, fishing net weights, needles, awls, sled runners, ice probes and even bone armour.

The 3 exhibits in the Heritage centre are thought to be recent copies of Scrimshaw and 2 show scenes of whaling ships (one ice bound) and the 3rd shows a sperm whale breaching.

Genuine examples from the days of the whaling ships are very valuable.