My father was born 3rdAugust 1918 to Austin and Laura Barton nee Marshall and sadly passed away 16thSeptember 2014 aged 96 years..He had a British Legion escort at his funeral who carried his coffin, adorned with flag and his army beret, into and out of church. I always thought that he would reach 100 and used to tell him he was the man that God forgot. Alas No.  His and my mum’s ashes are now in the same casket in Sutton On The Forrest graveyard together again… God Bless.

He confided in me in his last years that he joined the Royal Corps of Signals because he believed that in a conflict they would be the last units to go in. How wrong he admitted because he was one of the first soldiers to enter Rangoon, Burma after the Japanese left.

He had a personal Ghurkha assigned to him and he always held them in extremely high regard.  I remember that as a little boy of about 4 or 5 he commissioned a local Burmese fisherman to carve a wooden boat for me. The man had to carve something like 10 or so models before he produced one that floated up right.

I think I was about 6 or 7 when he was demobbed and about 1800 hours my mum was washing me ready for bed when this young man entered the house dressed in soldiers fatigues took my mum in his arms and kissed her passionately, my first meeting that I remember of dad..

One regret I have is that the war robbed me of special bonding with my father although I did love and respect him in later years.

On his jaunts home to visit mum he told me that they were not issued with weekend passes but he used to sneak home by going to the camp’s nearest station dressed in his army uniform, enter the toilets and change into civilian suit and catch the train back to York. He often marvelled that no one seemed to notice that a soldier entered the toilet but never came out. Many times the train would be searched by military police for soldiers who were detained but no time did he get caught. He repeated the disguise in reverse on his return to camp.

I have tried to obtain his military record but most of it is missing because of his secret work at Scarborough were he was maintaining equipment monitoring U-boat transmissions, subsequently decoded in Milton Keynes. Interesting to note that he was a time served plumber/heating engineer…

I asked for, and inherited his medals and it was with extreme pride that I wore them in this years (2018) remembrance  service in our small village church, Dunnington, York.

The following document was written by my father and is genuine..

On Top Of Castle Hill

I was a militia conscript called up in July 1939 for six month’s service and three and a half years on reserve. I got 10 shillings and a tanner per week. With the declaration of war, my pay increased to  14 shillings. I got married on 30 September 1939.

Now a regular soldier, I chose to join the Royal Corps of Signals. After training at Arrow Park, Birkenhead. I went on to Harrogate before being posted to Canterbury to install cable for the Royal Navy HQ. While there I saw some of the troops who'd been evacuated from Dunkirk.

It was after Dunkirk that the Special Wireless Sections were formed I joined the 105 SWS and was posted to Scarborough where we occupied a Coastguard hut on top of Castle Hill. Our billet was in one of the Coastguard's houses at the bottom of the hill. The guards themselves were sent elsewhere. There were 11 of us led by a

Marconi 'boffin'  Lt Rowley. We had a Morris Commercial to escape in should a German invasion be imminent. No next of kin could be told where we were.

My wife lived in the village of Sutton-on-the-Forest just off the Scarborough Road and one day as I took the officer to York for rations I asked him if  I could visit her as she was expecting our first child. He agreed on the promise I didn't tell her where we were stationed. The officer had a meal in the Rose & Crown in the village whilst I went to see her. I also popped home for the odd Saturday night and my wife pretty soon guessed we must be based at Scarborough (I lost her 2ndFebruary 1987 so now live alone with the memories).

Our role was to crack the German codes. No one knew this until many years' later.

I once attended a local talk about how the Enigma machines worked and heard how the Special Wireless Sections had been deployed in various parts of Britain.

The above  account was written by my father in 2006 and appeared in the Civil Service Motoring Magazine (CSMA) April in that year under the heading Memory Lane. It was in response to earlier letters in the magazine that the section had a Morris van with the rear part removed and replaced by a wooden shed which I believe was correct.  The army pay converted into 52½  and 70 pence respectively in to days currency. 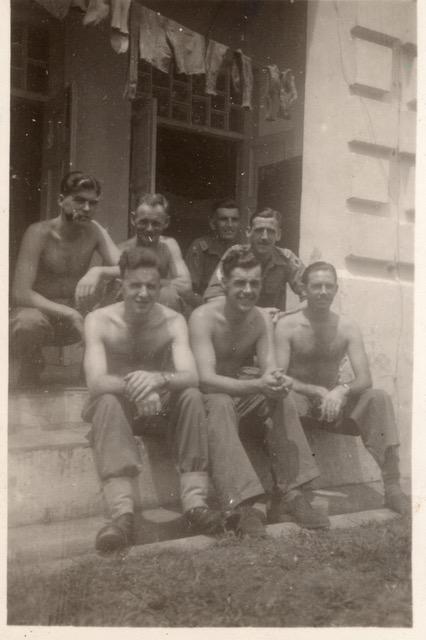 The 'Y' listening station on Stepney Hill, now known as GCHQ, (https://en.wikipedia.org/wiki/GCHQ_Scarborough) played a role in hunting down the Bismark and in the Cuban Missile Crisis, see https://www.bbc.co.uk/news/uk-50098955.